Photography and cinema drive the drone industry in both the professional and prosumer markets. Increasingly the line between the two is blurring, with prosumer and sub-$4,000 drones delivering commercial-level quality and advanced flying features that just a few years ago were exclusive to the highest-end equipment.

It can be daunting wading into the deep roster of drones designed for enterprise photography and video. Sure, DJI, long the market leader, makes some truly fantastic devices, but before you go out to buy the first Mavic you come across for your business photography needs, take a moment to appreciate the nuanced diversity of UAV hardware out there and understand the strengths and weaknesses of the current offerings across a variety of applications and budgets.

To help, we reached out to video and photography professionals to hear what they had to say. Here are our top picks for enterprise photography and cinema drones, along with some advice on deciding which photography drone is right for businesses of all sizes. The DJI Matrice 600 is as hardcore as it gets when it comes to aerial photography. Robust, powerful, ultra-stable thanks to its six rotors, and built for the most demanding industrial and photo/video applications, it’s our choice for a top-of-the-heap, no compromises system for professionals who demand the most from their gear.

In some ways the system represents a culmination of DJI’s best-in-class development, incorporating all the brand’s latest enterprise-grade systems and technologies in one camera-ready flight platform. It’s controlled with the A3 flight controller, links back to the ground with the Lightbridge 2 transmission system for high frame rate broadcasting, and has a range of 5KM thanks to a custom battery management system that incorporates six swappable batteries.

Like any good professional rig, the M600 is also customizable. In addition to a wide range of camera payloads (think GH4, RED, etc.), it’s fully compatible with the DJI Onboard SDK and Mobile SDK to meet the requirements of those building software for industrial applications. It has a dual parallel CAN and API ports for connecting DJI devices including the D-RTK GNSS units or third-party components of your choice. 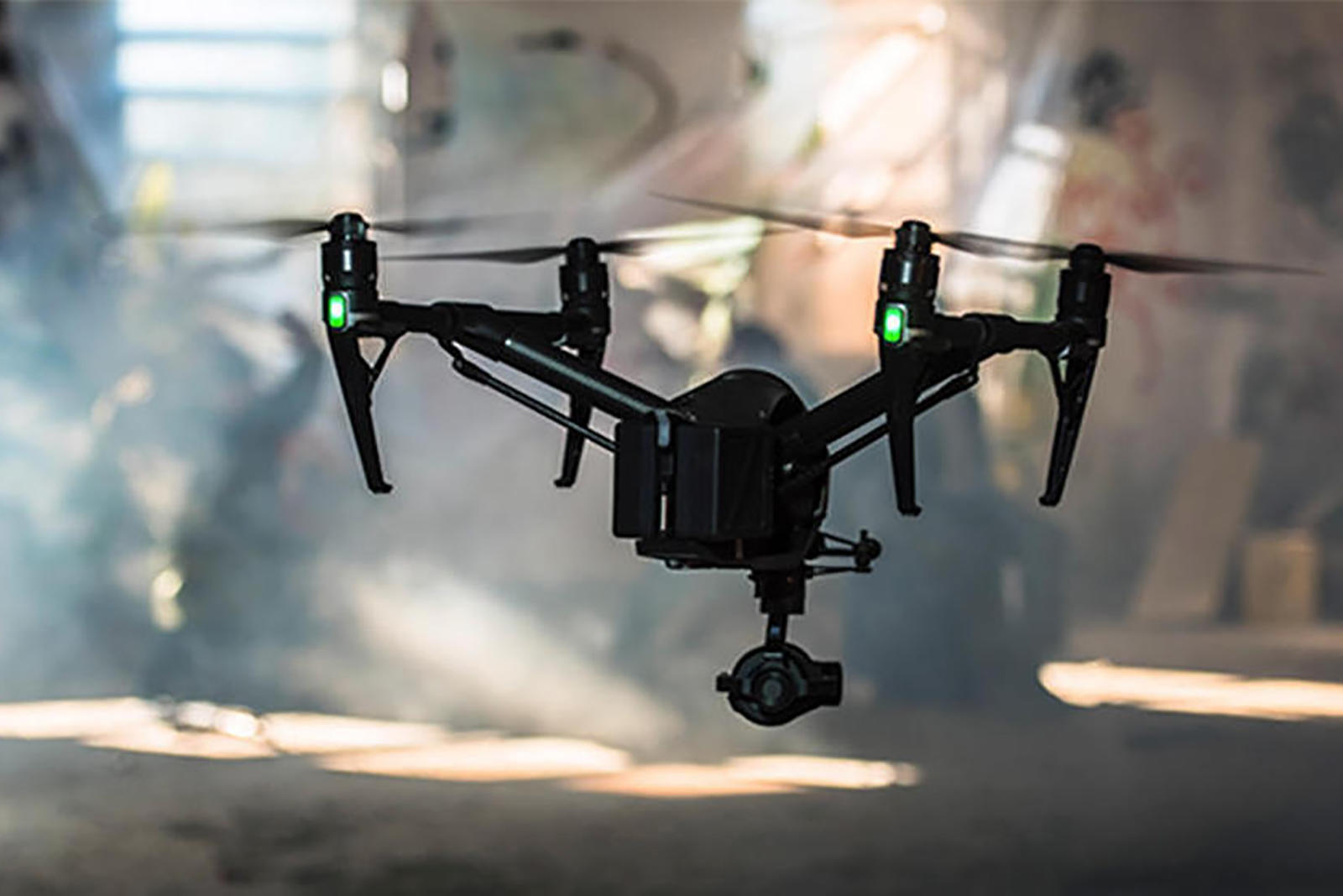 If any single UAV platform was responsible for changing the landscape of aerial filmmaking, it was DJI’s Inspire 1. The newest addition to the Inspire lineup, the Inspire 2, was made with filmmaking squarely in mind and builds on the Inspire 1’s well-earned legacy.

Among the knockout features, the Inspire 2 uses a dedicated FPV camera to give the operator a personal feed, leaving them free to operate the cinema camera independently. That essentially turns Inspire 2 into an untethered steadycam that’s just as good keeping pace with a couple people walking down the hall as it is getting a swooping aerial of a runaway speedboat in Florida’s emerald waters.

The base Inspire 2 model features a 1-inch sensor, 20MP sensor on the Zenmuse X4S gimbaled camera. It’s a very capable platform, and in reach of film students solo filmmakers at under $4,000. A Pro version ups the specs (and the price, to the tune of $11,000) with an M4/3 sensor that shoots 20.8 MP photos and Apple ProRes video at up to 5.2K. A Cinema Premium version improves camera payload even more with the Zenmuse X7, which has an S35 image sensor offering 6K CinemaDNG RAW and a wide dynamic range of up to 14 stops. That package runs north of $20,000 and is used on some of the world’s biggest shoots. 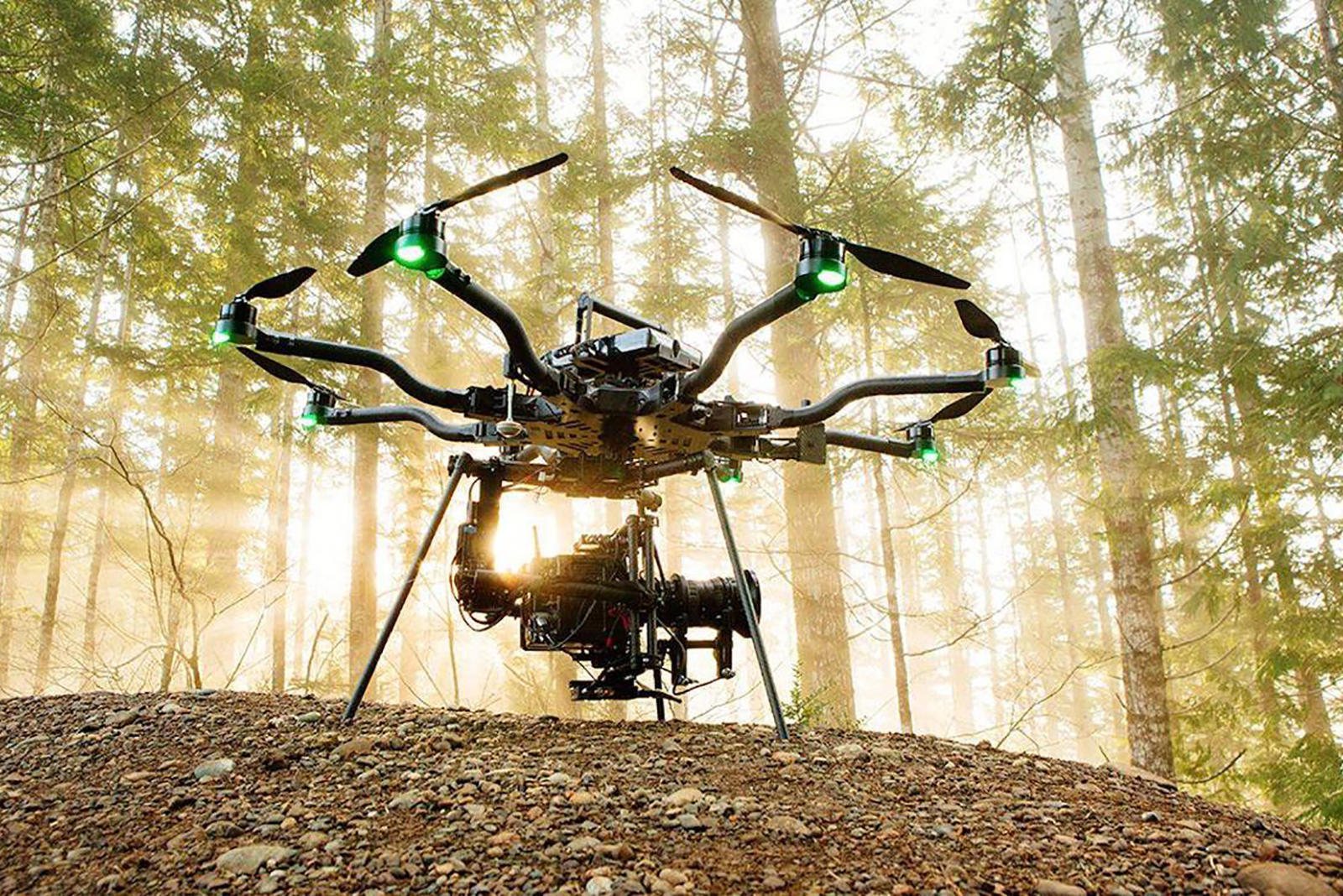 If four rotors are good and six rotors are better, why not push it to eight? That philosophy has made Freefly’s Alta 8 and Alta 8 Pro an enterprise go-to for cinema, offering power and redundancy, which is especially important when working over crews of people and carrying mind-boggling expensive camera payloads.

In addition to best-in-class stability, the Alta 8 has smart features like a quick-release system that allows camera payloads to be snapped either on top of the chassis for a sky view shot or below for ground view. Adjustable o-ring vibration isolation keeps shots still. Fly time is respectable, around 20 minutes with a 10-pound payload if using the optional set of 16Ah batteries.

On the safety and performance front, Alta 8 makes it a snap to monitor and analyze the performance and ‘health’ of the system using proprietary high-speed data logging via a microSD card. This flight log gives pilots access to a wide range of helpful data. The Alta is powered by Auterion, an industry-leading open-source infrastructure for UAV, sometimes called “the operation for enterprise drones.”


Best drone for use over people 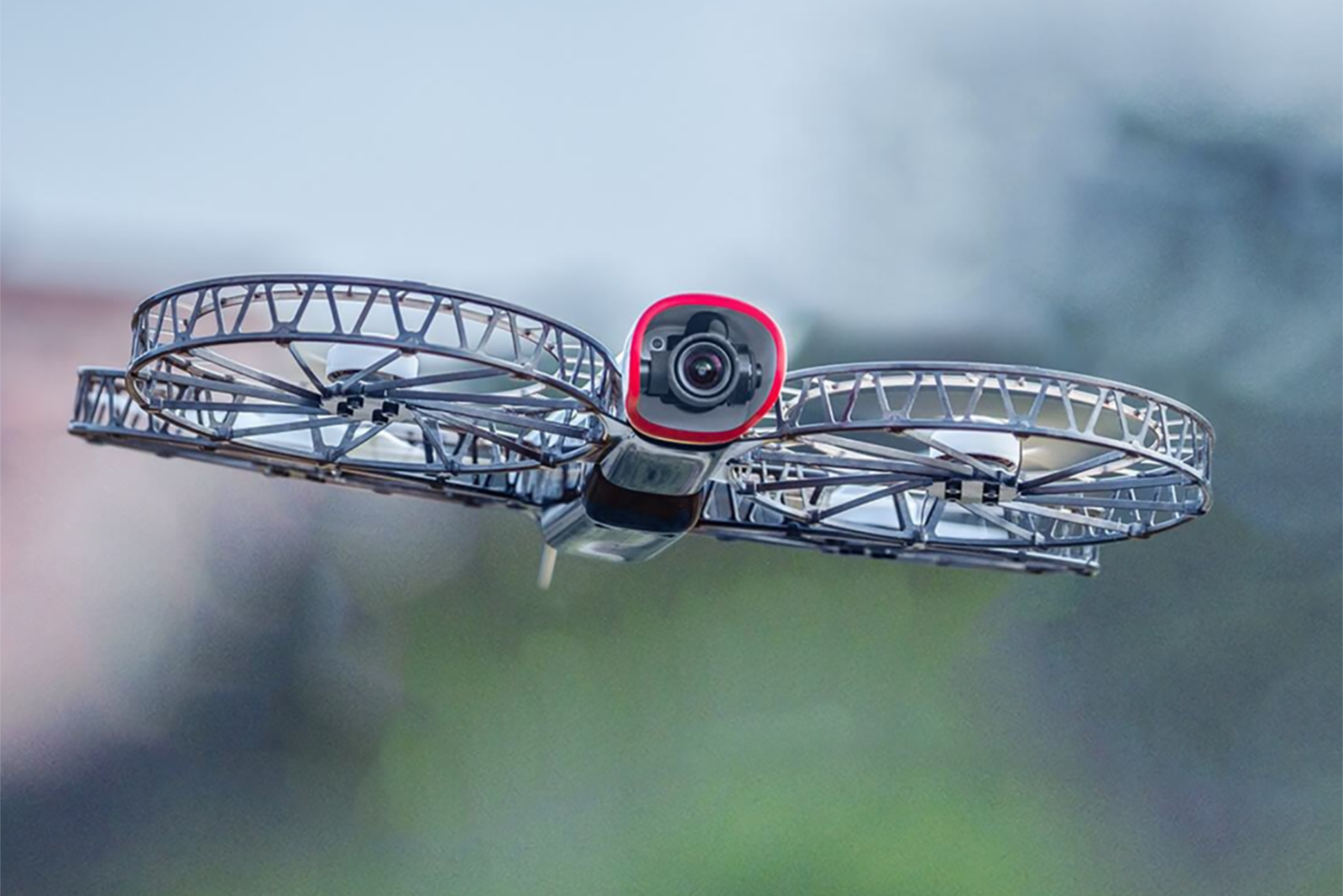 Need to use your drone over people? Say you’re a major news network covering a mass gathering. The network would need an FAA 107.39 waiver and a qualifying drone. Enter Snap, a unique lightweight drone with caged rotors, which the FAA seems to like a lot.

Vantage Robotics has made a splash by appealing to the enterprise aerial photography customer that simply needs to fly over people and therefore needs the safest equipment, and perhaps some help navigating a sometimes clunky waiver process. The four-rotor system is small enough to slide into a backpack and quickly deployable. It uses a Sony Exmor 4K camera that can shoot 12MP stills. It flies in winds up to 25mph and can be controlled via smartphone, game controller, or DSM controller. 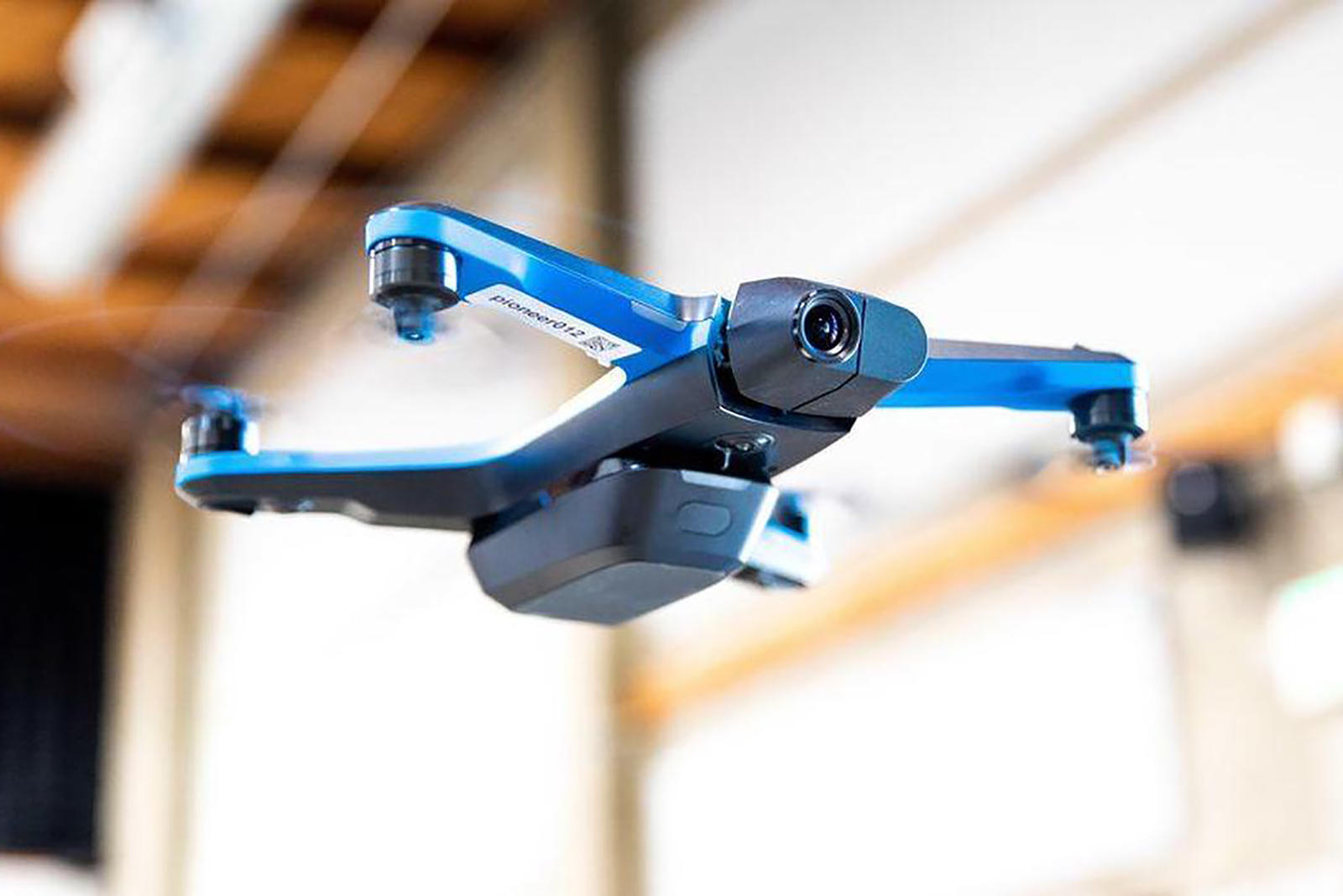 I’m not quite sure how they’ve done it, but the team at Skydio has managed to pack an incredible sensor and AI package into a platform that retails for just under $1,000. Aimed at the prosumer, this one shouldn’t be overlooked for enterprise use, particularly in situations where you need an intelligent follow-along photography drone that tracks a beacon (the drone is also fully flyable via a game controller).

In follow mode, the drone tracks the pocketable beacon and uses a combination of GPS, AI, and user inputs to plan a cinematic path that keeps the lens trained on the moving target. In some impressive test footage, the drone can duck around trees in dense woods to follow an ATV rider, a task that some more expensive systems simply aren’t capable of. The drone fits in a small case that belies its sensor package, which offers stunning 4K60 HDR video and 12MP HDR photos. The drone also has six 4K navigation cameras totaling a whopping 45 megapixels.

The Skydio 2 uses a super-fast NVIDIA Tegra TX2 with 256GPU cores capable of 1.3 trillion operations a second. The company calls its hardware a “flying supercomputer.” 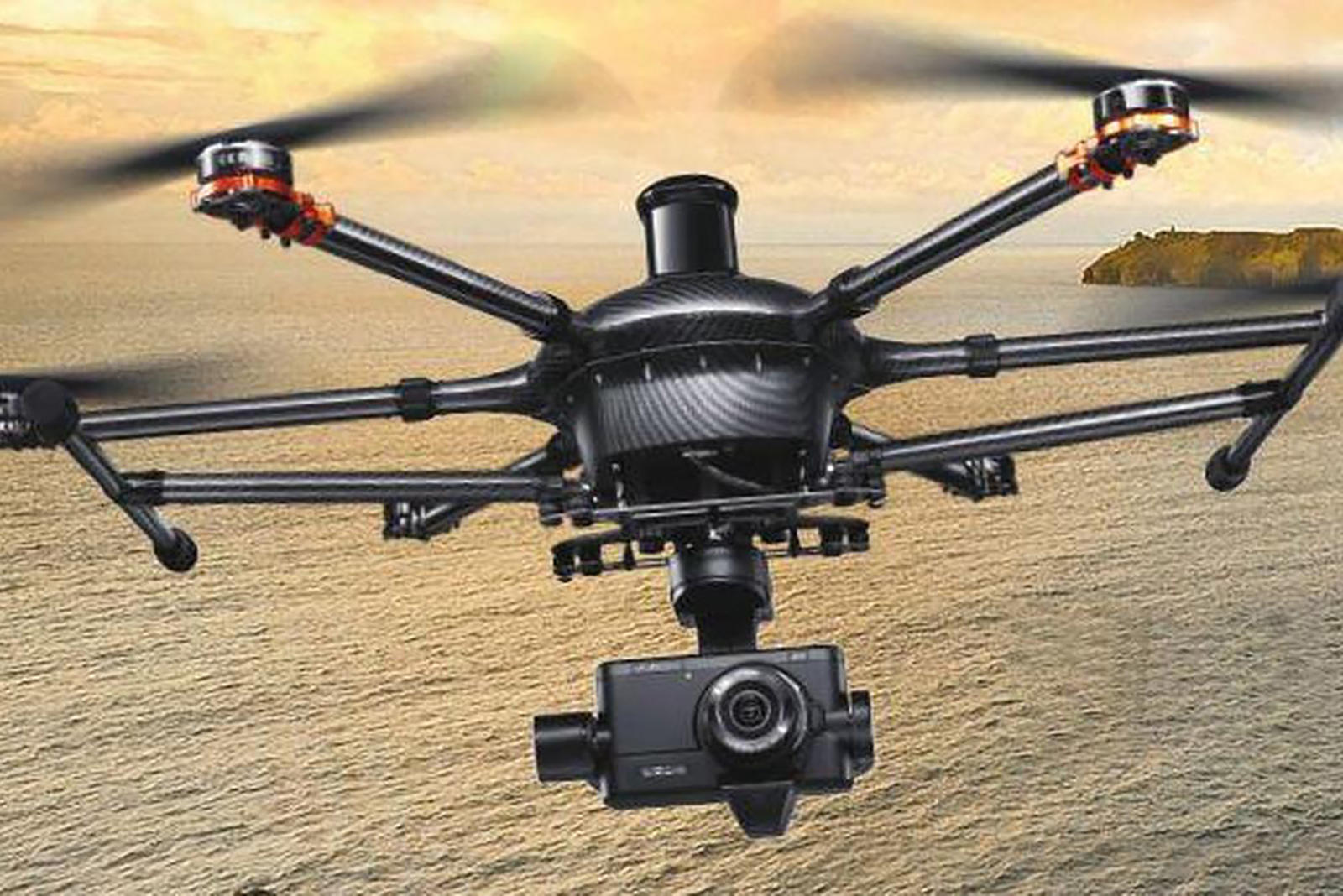 Foldable arms and retractable landing gear make this six-rotor, pro-grade UAV, the Yuneec H920 Plus Tornado, a versatile platform for enterprise video and photography applications. Yuneec’s camera platform, the CGO4, was developed in close cooperation with Panasonic and features a 3x optical zoom lens, 16MP photos, 4K-resolution video, and distortion-free picture quality. The zoom lens can be adjusted either by using the zoom slider on the screen or pushing the K6 slider to a certain position. When the landing gear is retracted during flight, the camera can be turned to capture a full 360-degree field of view.

The H920 Plus has various autonomous flight modes. One is an orbit mode, which orbits a single subject while allowing the operator to handle the camera. Journey mode sends the copter as far as 90 meters out for the perfect aerial shot. Users can also easily program an invisible route for the H920 Plus to fly, which can be useful in shot planning. Like other drones on this list, there’s also a follow mode, and paths can be planned via waypoints.

The H920s ground station (called the ST16) stands out and is among the nicest on the market. It’s an integrated transmitter, receiver, and Android platform that gives users full control or allows easy programming of autonomous flight. The large 7-inch integrated screen displays real-time footage, eliminating the need for an external device.

How to choose the right aerial photography UAV

There was a time, really just a few years ago, when your choice for an aerial photography platform was relatively straightforward. You either bought a DJI and called it a day, or you took a shot at with any of a number of startup outfits whose staying power in the sector was uncertain.

Fortunately, the market for commercial drones in general, valued at around $6 billion globally, and for aerial photography, in particular, has matured rapidly. There’s been a simultaneous rush of development in camera technology in particular. It’s now commonplace to find 4K resolution and still image capabilities in excess of 10 megapixels on UAVs.

If there’s a lingering gray area, it’s in the dividing line between pro-grade and consumer-grade UAVs. While top-end drones do come with feature sets and stacks that some professionals require, many enterprises might do just fine with a prosumer or even consumer model. Benchmarks like payload size are top-line indicators in guiding selection, but beyond that, it will surprise many enterprise customers just how feature-rich the technology and controls stack is for drones that cost less than $5,000, and in some cases, less than $1,000.

That said, here are a few considerations to help guide you to the right aerial photography platform.

The first should always be intended use, and if that happens to be capturing pristine video and stills, you’ll want to pay attention to more than the camera. The fact is, every camera system on this list is lightyears ahead of the technology we were raving about five years ago — you really can’t go wrong. But that’s not the end of the story when it comes to professional photography and video. The onboard image processor and baked-in file transfer and storage tools can make or break assets in a workflow. DJI’s Inspire 2 can transfer images at up to 1,000Mbps, which can be a deadline-saving feature in a tight turnaround.

Also consider where the drone will be flying and, crucially, in what conditions. Every drone manufacturer raves about ruggedness, but if you happen to be doing jobs in dirty, wet conditions, keep an eye out for real weather and dust resistance, which you’ll find on the Matrice line and in superlative hardware like the Alta 8.

Then again, if your jobs happen to require run-and-gun style shooting or, say, keeping pace with a mountain biker, your priorities are going to shift to smaller, nimbler models that prioritize autonomous flight via follow modes. Two great examples are Snap and Skydio 2. Snap has the added benefit of being FAA compliant for Rule 107 waivers, should you need to sore over people in a responsible and lawful fashion.

And then, of course, there’s the price. If you’re an SMB and this is your first piece of UAV kit, a sub-$1,000 drone might be just the ticket, which counsels Skydio 2. If you’ve got some money, turn to usability. Will your flying machine be in the hands of an experienced drone pilot, or will the controls be passed to the nearest available Gen Zer with a couple semesters of film school under their belt? If the former, let those experts guide you on what kind of equipment you should use. If the latter, consider the cost of a crash or the liability you might incur if someone should get injured. Maybe flight planning and autonomous modes are worth a look?

The good news here is that you do have options at every price point, and they’re pretty fantastic. Drones are fantastic enterprise tools across a variety of applications. The photography products they produce are stunning, and they’re gratifying tools to work with if treated with care. Happy flying.