Apple’s professional users — especially those working in the creative industries — have welcomed the company’s renewed focus on its professional Mac products, following the long-awaited introduction of the 2019 Mac Pro desktop, and the 16-inch revamp of its flagship MacBook Pro laptop. But there’s no doubt that Apple took its eye off the ball in the Mac market while it spent years concentrating on the iPhone, and that has given rival PC manufacturers a real opportunity to capture a slice of Apple’s creative pie.

Intel got the ball rolling back in 2018 with its Creator PC initiative, which was further boosted by Nvdia’s Studio campaign the following year, which aimed to extend the company’s graphics technologies beyond its traditional gaming audience and into the creative industries.

As a result, all the main PC manufacturers, including market leaders such as Dell, HP and Lenovo, now offer extensive portfolios of laptops and desktop PCs that are specifically aimed at creative users in fields such as graphic design, photography, video editing and animation. The involvement of Nvidia, with its RTX ray-tracing graphics technology has also attracted gaming specialists such as Razer and Gigabyte, whose expertise with high-end gaming graphics has allowed them to design some impressively powerful laptops for professional users.

So creative users are now spoilt for choice, with dozens of laptop and desktop systems now vying for their attention. Here, we’re focusing on ‘creator’ laptops. Check out our companion list of the best desktops for this use case. 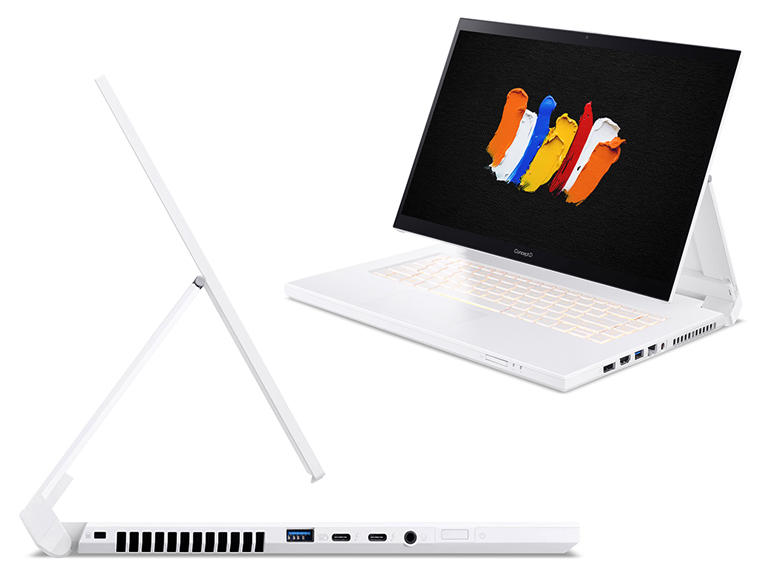 
The ConceptD 7 that ZDNet reviewed at the end of 2019 was an attractive desktop-replacement laptop for creative users, and the company has extended the range with an Ezel variation that introduces an unusual display design.

The highlight is the 15.6-inch touch screen with 4K resolution that supports 100% of the Adobe RGB colour space, which will be suitable for a wide range of graphics and design tasks (although there’s no mention of video colour standards, such as DCI-P3). Like many convertible laptops, the ConceptD 7 Ezel allows you to fold the screen right back so that the device acts like a large tablet. However, the hinged display panel can also tilt upwards — rather like Microsoft’s Surface Studio desktop PC — allowing you to sketch at a more comfortable angle with the Wacom stylus that’s included in the price. 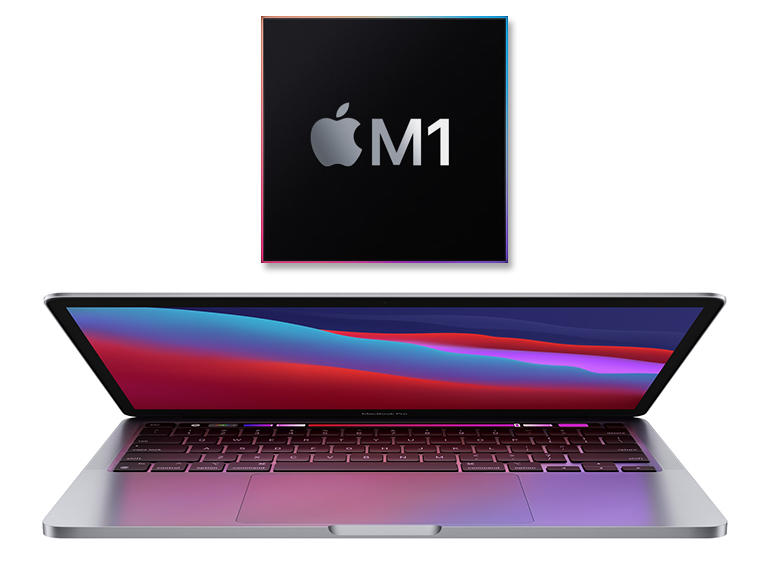 
Externally, the 13-inch MacBook Pro launched in November 2020 didn’t differ much from previous generations. But on the inside, it was an entirely new beast. The first ‘pro’ Mac based on the Apple Silicon M1 system-on-chip delivered impressive performance — including, crucially for creators, GPU performance — and battery life, with ZDNet’s Jason Cipriani claiming it was “the fastest Mac I’ve ever used”.

But while Apple’s Rosetta 2 technology provided compatibility with existing software and apps, which were written for Intel processors, developers still needed to update their software in order to gain the full performance benefits of Apple’s new processors.

Since then, Microsoft has announced native M1 support for Office 365, and Adobe has just released the M1 version of Photoshop, which it claims provides 50% performance increase over the MacBook Pro’s Intel-based predecessor. Support from these key developers should boost acceptance of the new Apple Silicon Macs, and the rumours of Apple’s next-generation M1X chip have Mac users eagerly awaiting the next updates for the MacBook Pro and iMac ranges.


View Now at Apple US 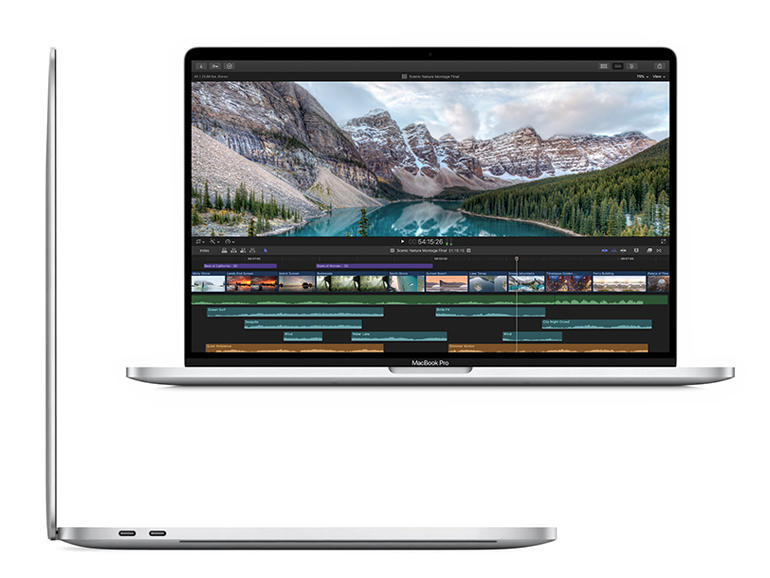 
After years of focusing on the iPhone, Apple turned its attention back to its traditional creative audience towards the end of 2019, with an entirely new Mac Pro, and this well-received revamp of its veteran 15-inch pro laptop.

The clue’s in the name, of course, and the 16-inch MacBook Pro managed to fit a larger 16-inch display into a design that’s only 9mm wider than its 15-inch predecessor, while keeping the weight down to just 2kg. The 3,072 by 1,920 (226ppi) display is a delight, and supports the DCI-P3 colour standard used in professional broadcasting; Apple is also making a renewed pitch for the audio and music markets, squeezing an impressive high-quality speaker and microphone system into the 16-inch MacBook Pro’s slimline design.

It’s expensive, of course, but with 6-core Core i7 and 8-core Core i9 processor options, AMD Radeon Pro graphics, all-day battery life, and a new keyboard design, Apple’s 16-inch MacBook Pro has restored the faith of many long-time Mac users. 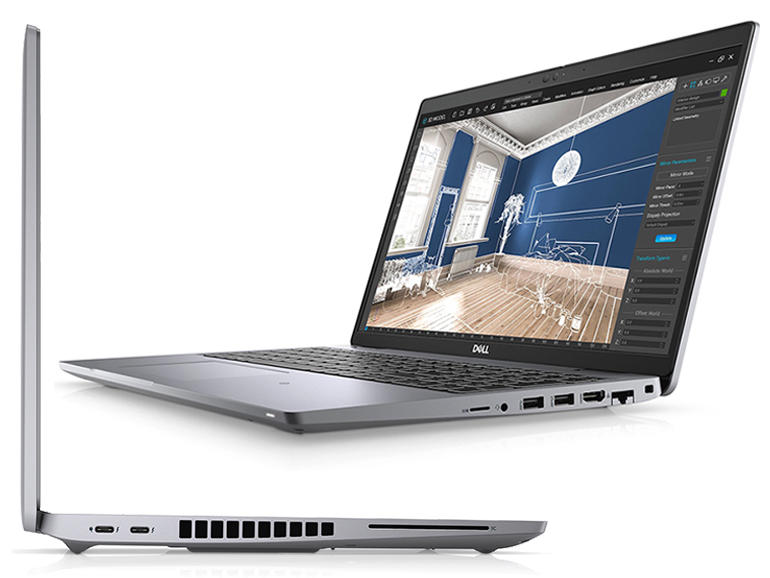 
Dell’s Precision range of mobile workstations provides impressive performance for graphics and video work, and the new 15.6-inch Precision 3560 is an attractive entry-level system that introduces Intel’s 11th generation processors to the range.

Other options include quad-core Core i7 processors, and a variety of memory and storage options. Oddly, most configurations are limited to a display with standard FHD (1920 x 1080, 141.2ppi) resolution, but Dell’s UK website offers a ‘build your own’ customisation option with a 4K display (3840 x 2160, 282.4ppi) available for an additional £495.30 (inc. VAT). US pricing for the 4K option has yet to be announced.


View Now at Dell US 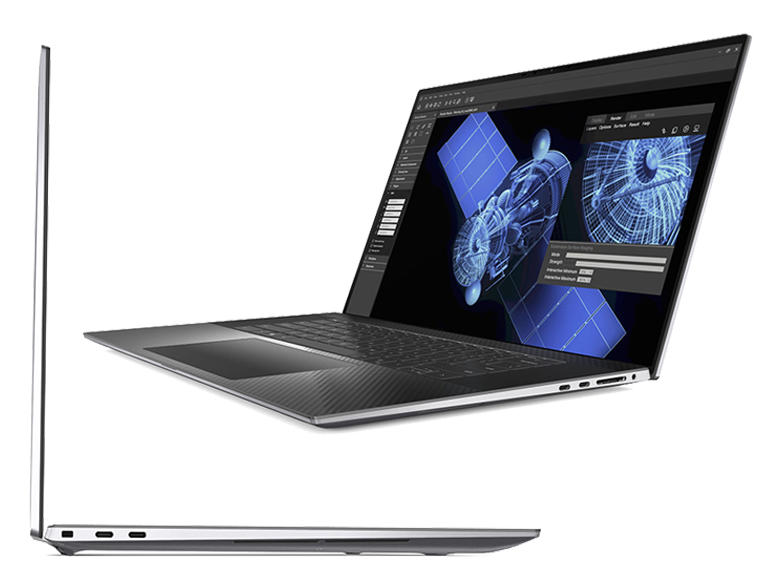 
Dell was clearly aiming for a slice of Apple pie when it launched the Precision 5750 at the end of 2020, boasting that it was the world’s most compact 17-inch workstation (and, briefly, claiming to be the lightest 17-inch model too). Its weight varies between 1.8kg and 2.5kg, depending on configuration, but that’s still a good weight for such a high-end performer.

The prebuilt configurations sold by Dell are different in the US and UK, although these tend to be lower-spec models with modest FHD (1920 x 1200, 133.2ppi) displays and integrated graphics.

It’s a shame that the high-resolution display only supports Adobe’s RGB colour standard, and doesn’t offer DCI-P3 support as an option for professional-level video editing.


View Now at Dell US 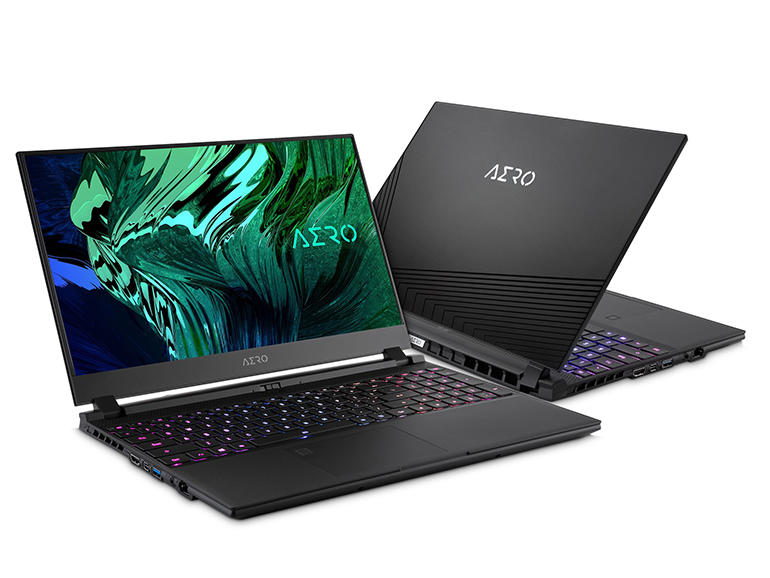 
Gigabyte recently took time out from its traditional gaming pursuits to announce updates for its Aero range of ‘creator laptops’. First out of the gate is its new Aero 15 OLED, which as the name suggests, boasts a 15.6-inch AMOLED display with 4K resolution (3840 x 2160, 282.4dpi), plus updated Nvidia GeForce RTX 30 Series graphics.

Along with the new GPU options, this year’s Aero 15 OLED models also support both the Adobe RGB and DCI-P3 colour standards for professional video editing, which was lacking in last year’s models. However, the 2020 models are still on sale, with older RTX 20 Series graphics, so make sure you double-check the specs before buying.


View Now at Amazon US


Customisable large-screen laptop with plenty of CPU and GPU options 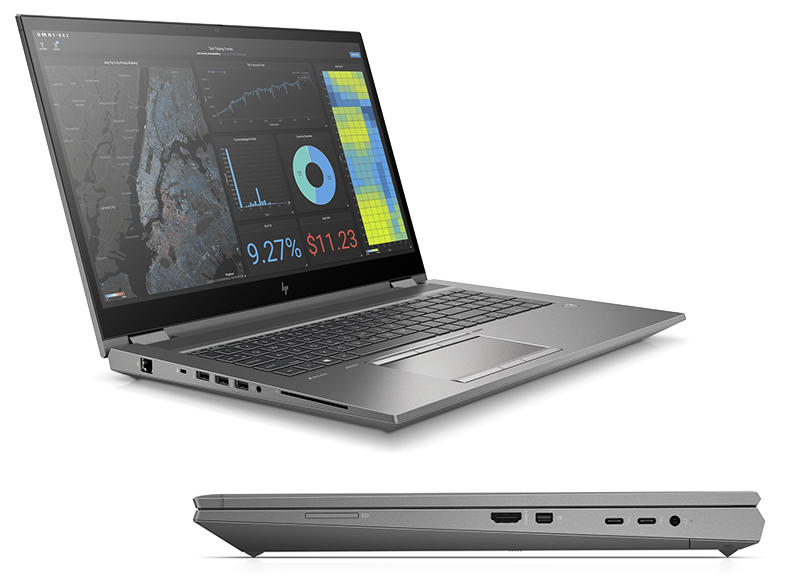 
HP’s ever-expanding range of ZBook mobile workstations now boasts several different laptop designs, including the lightweight Firefly. But sitting at the top of the range, like King Kong atop a skyscraper, is the ZBook Fury G7.

The Fury G7 is available with either 15.6-inch or 17.3-inch displays but there’s no point in compromising with a desktop replacement system such as this, so we’d opt for the 17-inch model, which has a starting weight of 3kg, depending on configuration. It’s also noticeable that HP studiously avoids any mention of battery life, so this is very much a laptop designed for desktop-replacement use, at home or in the office.


View Now at HP US 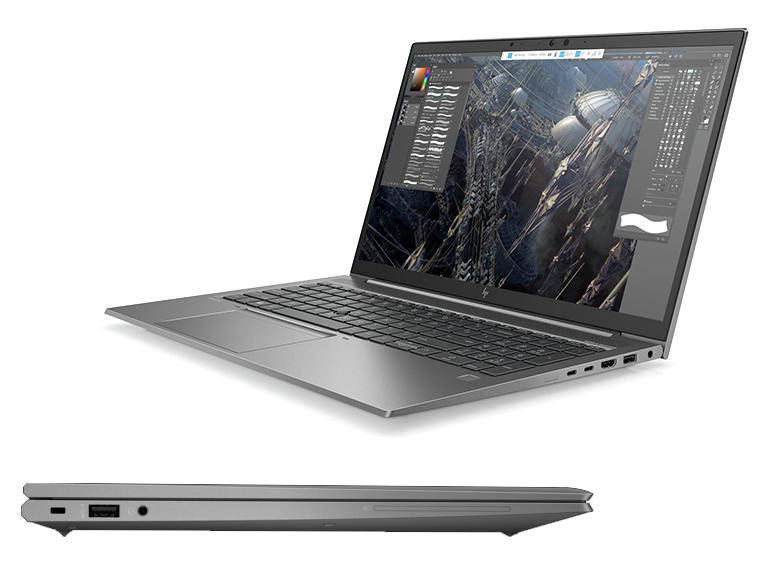 
We’ve been impressed by HP’s ZBook laptops in the past, and the company continues to expand the ZBook range with a variety of models aimed at different types of creative users and tasks. The ZBook Firefly represents the most portable end of the range, with this 15.6-inch model measuring 19mm thick, weighing 1.75kg, and boasting 14-hour battery life. There’s a more compact 14-inch model available too, which weighs just 1.4kg.

The ZBook Firefly’s lightweight design does mean that it’s primarily focused on 2D graphics and design work, and the display only supports the sRGB colour standard. But, of course, there are heavier and more powerful ZBook models that provide DCI-P3 support for video editing work as well.


View Now at HP Inc US 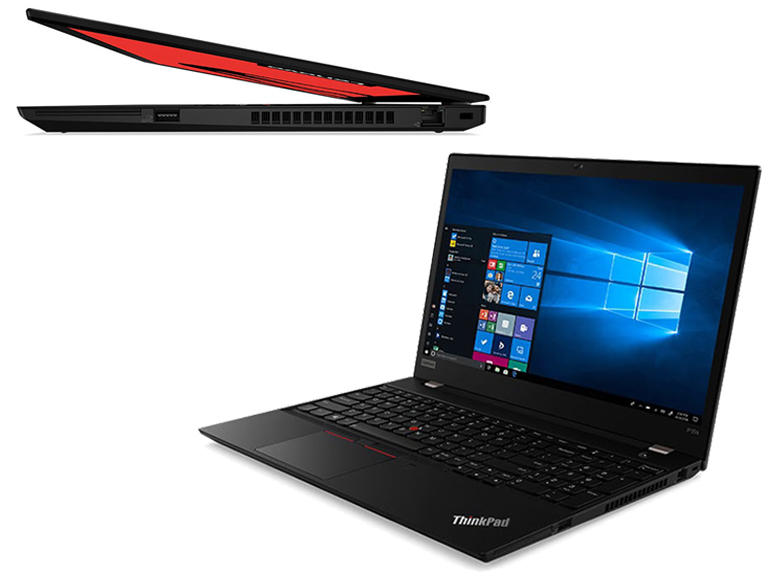 
The 15.6-inch ThinkPad P15s isn’t the most powerful of Lenovo’s P-Series mobile workstations, but it’s an attractive entry-level model that combines a lightweight, 1.75kg design with strong performance and competitive pricing.

The 4K display handles 100% of the Adobe RGB gamut, but there’s no support for the DCI-P3 standard widely used in video editing, which suggests that the ThinkPad P15s is primarily aimed at 2D graphics and design use cases. However, there are other models in the ThinkPad P-Series that provide Xeon processors and more powerful GPU options for 3D design and video editing work.


View Now at Lenovo US 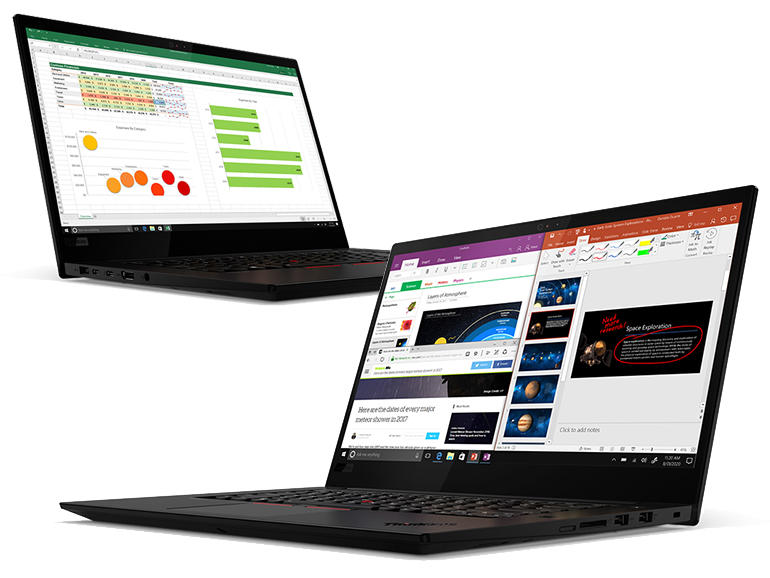 
Lenovo’s ThinkPad X1 range focuses on portability, and even this top-of-the-range Extreme model with its 15.6-inch display weighs in at around 1.7kg, while still offering professional-level features and performance. The 4K display with 3840-by-2160 resolution (282.4ppi) is bright and colourful, and supports 100% of the Adobe RGB colour gamut, so it will be suitable for a wide range of graphics and design tasks. There’s no mention of the DCI-P3 standard, which is widely used in video editing.

The ThinkPad X1 Extreme that we reviewed a couple of years ago only provided two prebuilt configurations, but the current Gen 3 model now provides a much wider range of customisation options. Most of the entry-level models only offer FHD (1920 x 1080, 141.2ppi) resolution, though, so if you want a 4K display you’ll need to step up to a starting price of $2,405.40 or £2,8199.99 (inc. VAT). That price also includes a 6-core Core i7-10750H processor running at 2.6GHz (up to 5.0GHz with TurboBoost), along with 32GB of RAM, 1TB of solid-state storage and Nvidia GeForce GTX 1650 Ti graphics.

But while Lenovo’s website does provide a wide range of customisation options, you’re stuck with that GTX 1650 Ti GPU, which suggests that the X1 Extreme is focusing on 2D graphics and design, rather than high-end video editing.


View Now at Lenovo US 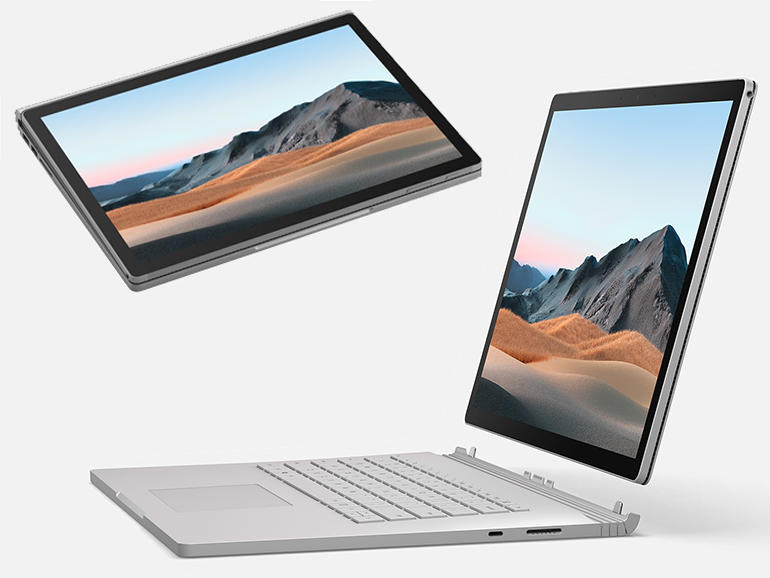 
The detachable design of Microsoft’s Surface Book has proven extremely popular, especially with creative users who enjoy the freedom of using it as a tablet with (optional $80/£100) stylus for sketching and visualisation work.

Like its predecessor, the Surface Book 3 is available with either 13.5-inch or 15-inch displays, although creative users will probably prefer the 15-inch model with not-quite-4K display (3240 x 2160, 260dpi). There’s a $1,699.99/£1,679 entry-level model based on a 10th-generation Core i5 processor with integrated Iris Plus graphics, but it’s only the more expensive Core i7 configurations that offer a discrete GPU.


View Now at Microsoft US 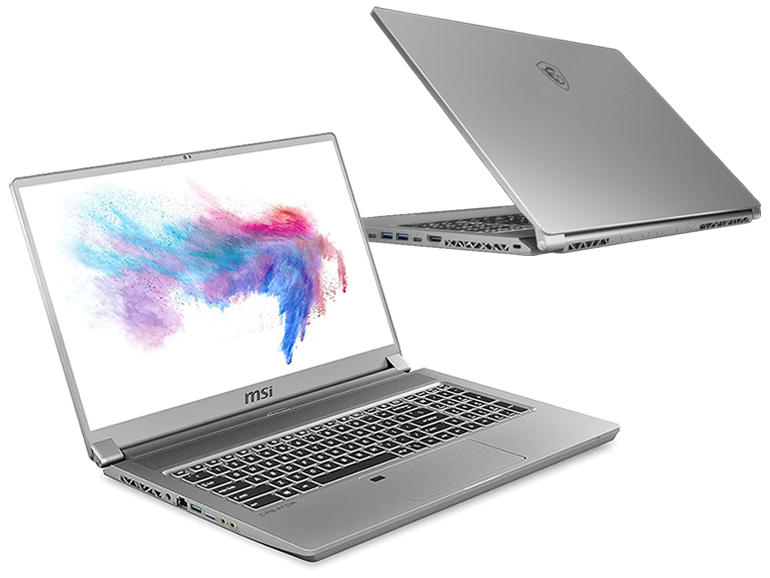 
MSI is best known for its gaming laptops and displays, but it does have its Creator Series of laptops, which was recently updated with the new Creator 17. Suitable for a wide range of graphics, design and video work, the Creator 17 boasts an impressive 17.3-inch Mini LED display with 4K resolution (3840 x 2160, 254.7dpi), 1,000 nits brightness and support for the DCI-P3 colour standard widely used in professional-level video editing.

We’re not sure we’d describe 2.5kg as ‘ultra-light’ but it’s still good going for a 17-inch desktop replacement such as this, and MSI has clearly drawn on its gaming expertise to squeeze so much power into a chassis that’s just 20mm thick.


View Now at MSI US 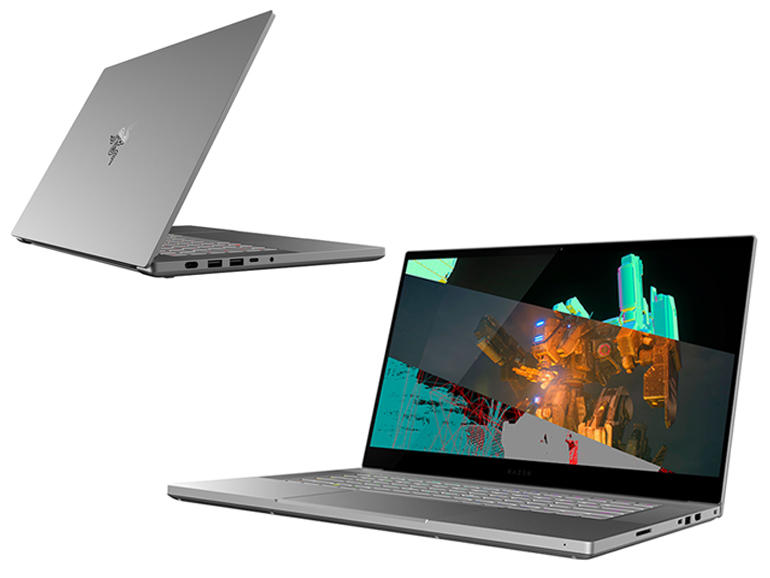 
Razer has always been known for its gaming gear, including the popular Blade range of laptops, which combine powerful graphics performance with attractive, slimline designs. But that graphics performance can be turned to other tasks as well, and Razer has produced a number of Blade laptops that are specifically aimed at designers and creative users.


View Now at Razer US