The external storage market has experienced rapid growth over the last few years, particularly in the retail consumer segment. The demand has been fueled by increased amounts of user-generated multimedia content and high-resolution artwork / assets for games that are better off being installed in external drives. The growth has mainly been in in bus-powered flash-based storage devices.

Thunderbolt SSDs are at the top in terms of both performance and price, but the last few years have seen various high-end portable SSDs with a USB interface. The USB 3.2 Gen 2×2 (20Gbps) ecosystem has been slowly gaining traction. Many device solutions have turned up in the retail market over the last couple of years – all of them have been based on ASMedia’s ASM2364 bridge chip, with a discrete PCIe 3.0 x4 NMVe SSD downstream of the bridge. While such configurations deliver on the 20Gbps promise, they are not particularly power-efficient.

The power efficiency aspect changed earlier this month with the introduction of the Kingston XS2000 portable SSD. Based on Silicon Motion’s SM232x family of USB Flash Drive (UFD) controllers, the product family offers full Gen 2×2 performance at a fraction of the power consumed by the Gen 2×2 SSD solutions currently in retail.

External bus-powered storage devices have grown both in storage capacity as well as speeds over the last decade. Thanks to rapid advancements in flash technology (including the advent of 3D NAND and NVMe) as well as faster host interfaces (such as Thunderbolt 3 and USB 3.2 Gen 2×2), we now have palm-sized flash-based storage devices capable of delivering 2GBps+ speeds. Traditionally, these portable drives have fallen into one of the six categories below, depending on the performance profile and the components used.

Silicon Motion, on the other hand, was late to UFD party in terms of putting out their press release. However, they managed to get their design wins shipping along with the public announcement of their SM2320 and SM2321 controllers. The SM2320 USB 3.2 Gen 2×2 controller actually promises 2GBps+ speeds, while the SM2321 USB 3.2 Gen 2 enables 1GBps+ flash drives. These numbers seem to offer more than what Phison promises in the U17 and U18, though real-world testing is essential to compare the two controllers beyond the claimed marketing numbers.

The SM2320-based portable SSDs (and the U18-based ones, when they eventually appear for sale) represent the retail market’s first look at a non-ASMedia solution in the USB 3.2 Gen 2×2 device market. The advantages of a native UFD controller over a combination of a bridge and NVMe controller are self-evident:

The SM2320 board measures 62mm x 25.4mm x 5mm, and weighs a puny 7g. These are without the casing / thermal solution. The board is double-sided and contains four flash packages. A USB 3.2 Gen 2×2 Type-C cable was supplied along with the board. 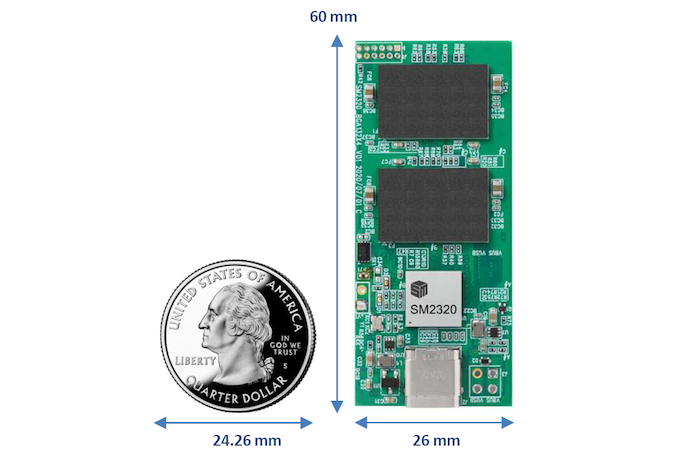 The SM2320 reference board represents the first native UFD USB 3.2 Gen 2×2 solution that we have evaluated. For comparison purposes, we have a couple of leading edge bridge-based 1TB solutions – the WD_BLACK P50, and the Seagate FireCuda Gaming SSD. The DIY Silverstone MS12 is also included. As a representation of the native UFD controller scene for high-performance flash drives, we also have the Crucial X6 4TB Portable SSD based on the Phison U17. Despite its USB 3.2 Gen 2 (10Gbps) performance rating, and its quadrupled capacity point, we believe it offers insights into the power efficiency possible with non-dual chip solutions.

CrystalDiskInfo provides a quick overview of the capabilities of the internal storage device. Since the program handles each bridge chip differently, and the SM2320 is quite new, many of the entries are marked as vendor-specific, and some of the capabilities (such as the interface) are deciphered incorrectly. The temperature monitoring worked well, though.

The table below presents a comparative view of the specifications of the different portable SSDs presented in this review. A small note is in order here: While the Silicon Motion UFD controller is the SM2320, it is often interpreted by monitoring programs as the SM2320XT due to its DRAM-less nature. In this review, the SM2320 and SM2320XT are used interchangeably.

Prior to looking at the benchmark numbers, power consumption, and thermal solution effectiveness, a description of the testbed setup and evaluation methodology is provided.

The most attractive aspect of the Quartz Canyon NUC is the presence of two PCIe slots (electrically, x16 and x4) for add-in cards. In the absence of a discrete GPU – for which there is no need in a DAS testbed – both slots are available. In fact, we also added a spare SanDisk Extreme PRO M.2 NVMe SSD to the CPU direct-attached M.2 22110 slot in the baseboard in order to avoid DMI bottlenecks when evaluating Thunderbolt 3 devices. This still allows for two add-in cards operating at x8 (x16 electrical) and x4 (x4 electrical). Since the Quartz Canyon NUC doesn’t have a native USB 3.2 Gen 2×2 port, Silverstone’s SST-ECU06 add-in card was installed in the x4 slot. All non-Thunderbolt devices are tested using the Type-C port enabled by the SST-ECU06.

The specifications of the testbed are summarized in the table below:

The testbed hardware is only one segment of the evaluation. Over the last few years, the typical direct-attached storage workloads for memory cards have also evolved. High bit-rate 4K videos at 60fps have become quite common, and 8K videos are starting to make an appearance. Game install sizes have also grown steadily even in portable game consoles, thanks to high resolution textures and artwork. Keeping these in mind, our evaluation scheme for portable SSDs and UFDs involves multiple workloads which are described in detail in the corresponding sections.

A comprehensive overview of the performance of the SM2320 reference design is provided in the following sections. Prior to providing concluding remarks, we have some observations on the drive’s power efficiency aspect also.