Today Xiaomi is announcing three new devices – the 11T, the 11T Pro and the 11 Lite 5G NE. We’ve had the first two in for review for a bit now and are able to give some first-hand experiences with the phones today.

The Xiaomi 11T series – which by the way isn’t called anymore “Mi” in the name, it’s literally just “Xiaomi 11T” now, are supposed to be additions to the company’s flagship line-up, but coming in at lower price points. We had reviewed the Mi 11 back in March and the big brother, the Mi 11 Ultra in July, so make sure to read those pieces as the 11T series fits into the line-up, albeit being different.

What defines the 11T series is the fact that they’re slightly lower priced and more budget than the original Mi 11, notably on the display side which has now been reduced to a 1080p panel. Build quality is also different, and finally, we’re seeing a different set of SoC options depending on whether you get the regular 11T or the higher-end 11T Pro.

Starting off with the SoCs, the two 11T devices are absolutely interesting phones as besides the usual Samsung Galaxy devices each year who are powered by Snapdragon and Exynos SoCs, Xiaomi is employing a similar strategy here with the 11T series in dual-sourcing both from Qualcomm and from MediaTek. 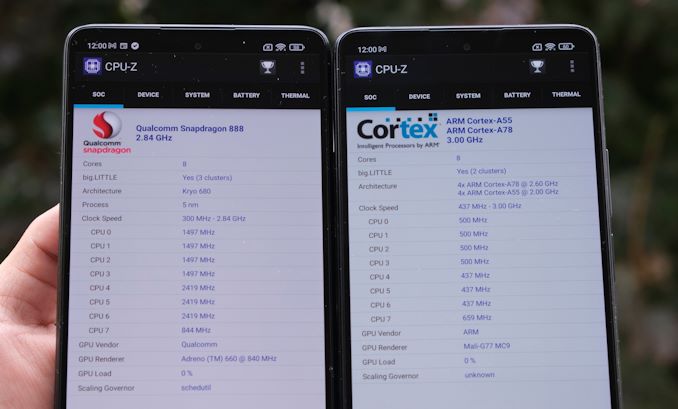 The regular 11T is powered by the MediaTek Dimensity 1200 “Ultra” – we’re not sure what the Ultra here stands for but it seems it’s related to a high clocked NPU – there are no differences on the CPU clocks. The SoC features a Cortex-A78 at up to 3.00GHz, three A78’s at 2.60GHz, and four A55’s at 2.00GHz. The GPU is a MaliG77MP9, although we can’t confirm the frequency. This is MediaTek’s highest end chip at this moment in time, so it’s quite interesting. What also makes it special is that it’s on TSMC’s 6nm process node, and it’s the first chip we’ve had in our hands on this node.

The Snapdragon 888 needs no introduction, and that’s what’s powering the 11T Pro. There are a few oddities with the chip though, which we’ll cover in the system performance section, but the way Xiaomi is configuring the chip isn’t quite flagship level in terms of behaviour.

What’s very exciting about the two devices with differing SoCs is that both phones are otherwise absolutely identical in specifications. It’s essentially the same phone, just with a different SoC, and different charging capabilities. For apples-to-apples chipset comparisons, it rarely gets better than this, though we’ll see that there are behavioural discrepancies. 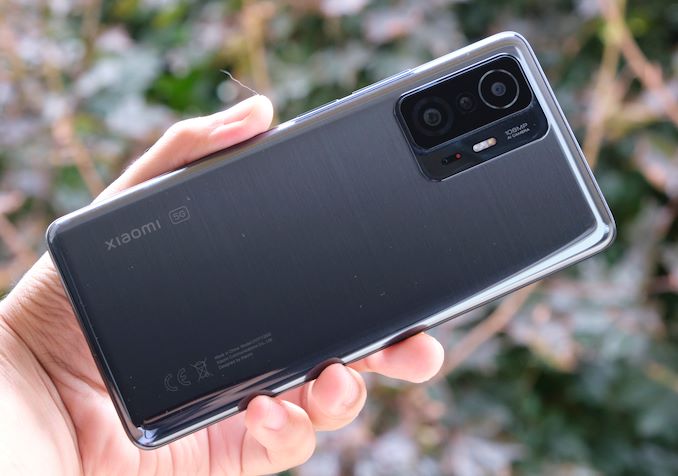 The back of the phone is relatively generic with its glass back. One thing to note here is that the phone is a bit more on the wider side at 76.9mm. Weight is reasonable at 203-204g due to the 5000mAh battery.

In general, the build quality and design of the phone isn’t quite as attractive and sleek as what we saw on the Mi 11, and it does feel like a slightly cheaper / lower end model in the Mi 11 flagship series. 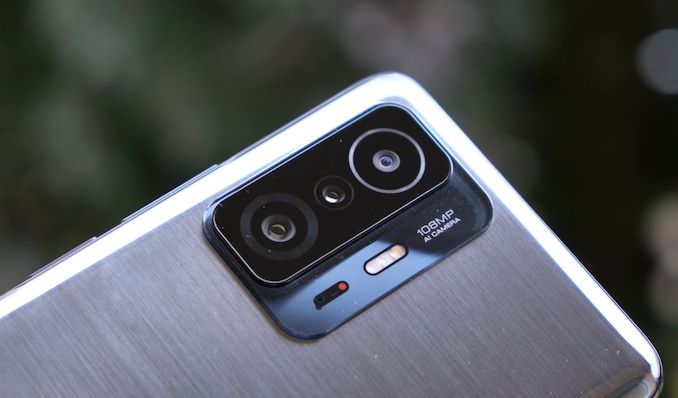 On the camera side of things, Xiaomi is employing a 108MP sensor, but this is not the HMX that was found in the Mi 11 but rather the smaller HM2 sensor which uses 0.7µm pixels compared to 0.8µm on the sibling.  The optics are 24mm equivalent focal length at f/1.75 aperture, but without OIS.

There’s a 5MP telephoto module but this is only used for macro shots, it can’t be used for any actual zooming in.

Finally, there’s a basic 8MP ultra-wide with f/2.2 and 120° field of view – it’s really basic. In general, the whole camera setup is simple and Xiaomi doesn’t give it too great specifications.

Xiaomi is focusing around fast-charging in these devices, notably the 11T Pro comes with a 120W charger. It performs as advertised; however, we’ll be talking about the topic in more depth in the review.

The 11T starts at 499€, which is quite reasonable, and the 11T Pro starts at 649€ – which is actually quite steep given that one can have the Mi 11 for around 715€ nowadays, the phone would have to somehow rationalise itself in its differentiations compared to its series sibling.